I arrived in Taoyuan Airport yesterday at 4pm local time. So far I’ve been amazed by every single thing I have seen. From a local perspective I don’t feel like a tourist so far, more of an explorer.

I’m flying out of Amsterdam, using KLM’s Air & Rail ticket and leaving from Brussels South railway station with a Thalys train. I must say I was impressed. No more kiss & ride parking hassle, airport traffic & taxi driver issues with this combined medium of transportation. Especially since the train arrives straight inside the AMS Schiphol airport.

I’m part of the ethnic minority this time. This is predictible since I’m flying out 2 days before Chines New Years’s eve. Which I had no clue while I was booking the trip. I’m getting ready for a non stop 11 hours & 30 minutes flight. I don’t hear the crying baby a few rows behind thanks to noise cancellation’s magic. I also test my new compact writing solution on an airplane for the first time (using the iPad with a bluetooth keyboard. I think I’m gonna have a Heineken & try to fall asleep asap. Time to flip the tray table. Over and out.

Believe it or not, winter in Taiwan would be a reason for a national news headline in Belgium. I’m writing from the rooftop of a building and its close to 24°. Apart from that summer feeling that involves immediate happiness, I embrace everything i’ve seen so far in Taipei.

Last night, we went to a Chinese New Year’s eve night market. It was full of food samples, animations, lights & candy. I had a stinky tofu, a bamboo lemonade and countless samples. I didn’t mind the crowd neither the noise as it was a new discovery ever meter. Plus, I fell like an explorer as I didn’t notice any other foreigner on this long street. Calligraphy brushes, paper lanterns, dried beef were amongst the things that caught my eye.

We came home on the metro and missed our connection, which gave me plenty of time for a slow shutter night view of Taipei. I have to head back doing cool stuff. You don’t waste a 24° Friday writing a blog post. I’ll tell you about New Year’s Eve tomorrow. 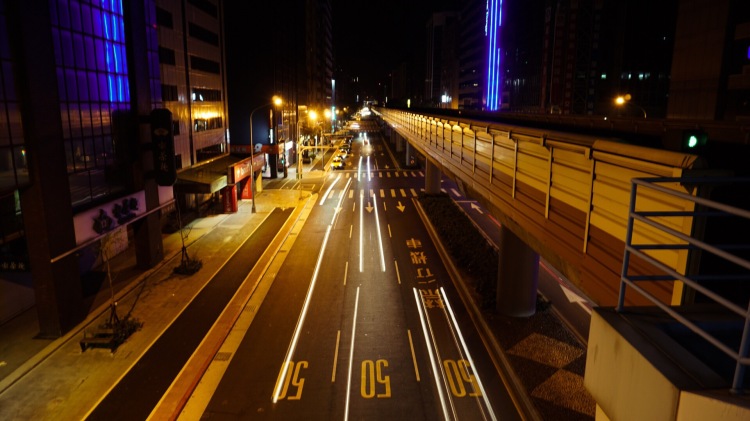